In the book, “A COVERT AFFAIR”, Jennet Conant follows the OSS detachments that operated in the CBI Theater.  These members of the forerunner of the CIA included Elizabeth (Betty) MacDonald, her future husband Frederick MacIntosh, Julia McWilliams and her future husband Paul Child, and many others.

From time to time, the OSS teams would report armed clashes in the area (China) as local factions jockeyed for position, “The warlords were always shooting at each other,” recalled Betty, “But we never really felt scared.  We had pretty good protection, and the Flying Tigers kept the Japanese at bay.” 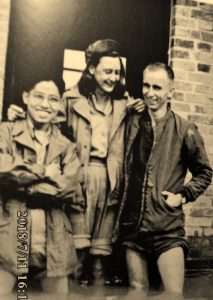 Betty MacDonald w/ colleagues in the doorway of the flooded MO print shop during the 1945 flood in Kumming. The fortified walls around the outpost made the OSS compound a lagoon.

Betty also reported, “the Chinese never followed the rules.  Smuggling was a way of life.  They brazenly peddle state secrets…