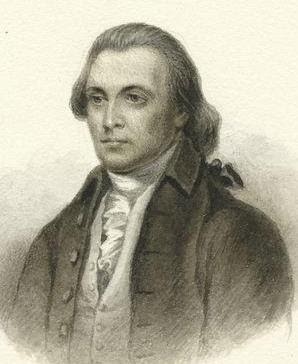 At last night’s presentation on the John and Abigail Adams and George Washington, I related an anecdote that circulated at the First Continental Congress. It raised a question, so I decided to take a closer look at the record.

Source: Boston 1775: “He would raise a thousand Men at his own expence”?

He told us that Coll. Washington made the most eloquent Speech at the Virginia Convention that ever was made. Says he, “I will raise 1000 Men, subsist them at my own Expence, and march my self at their Head for the Relief of Boston.”

Silas Deane of Connecticut heard the same story about George Washington, writing home to his wife in the middle of September:

It is said that in the house of Burgesses in Virginia, on hearing of the Boston Port Bill, he offered to raise and arm and lead one thousand men himself at his own expense, for the defence of the country, were there need of it. His fortune is said to be equal to such an undertaking.

Adams recalled his conversation with Lynch in the autobiography he wrote in the early 1800s:

Mr. Lynch a Delegate from South Carolina, who, in conversation on the Unhappy State of Boston and its inhabitants, after some Observations had been made on the Eloquence of Mr. Patrick Henry and Mr. Richard Henry Lee, which had been very loudly celebrated by the Virginians, said that the most eloquent Speech that had ever been made in Virginia or any where else, upon American Affairs had been made by Colonel Washington.

This was the first time I had ever heard the Name of Washington, as a Patriot in our present Controversy, I asked who is Colonel Washington and what was his Speech?

Colonel Washington he said was the officer who had been famous in the late french War and in the Battle in which [Gen. Edward] Braddock fell. His Speech was that if the Bostonians should be involved in Hostilities with the British Army he would march to their relief at the head of a Thousand Men at his own expence. This Sentence Mr. Lynch said, had more Oratory in it, in his Judgment, than all that he had ever heard or read.

And in an 11 Nov 1807 letter to Dr. Benjamin Rush, Adams included the story among the influential “anecdotes” that preceded Washington:

Mr Lynch of South Carolina told me before We met in Congress in 1774 that “Colonel Washington had made the most eloquentt speech that ever had been Spoken upon the Controversy with England, viz That if the English Should Attack the People of Boston, he would raise a thousand Men at his own expence and march at their head to New England to their Aid.”

It’s a pity that there’s no basis to Lynch’s story. Sources from Virginia, where people were after all most likely to have heard Washington speak, say nothing about it.

Lynch and Adams spoke at the end of August. The Virginia delegation to the Congress started to arrive on 3 September, with Washington coming the next day. Yet the story continued to spread among the New England delegates, as shown by Deane repeating it in the middle of September. Even decades later, when Adams repeated the story, he didn’t write about now knowing it was untrue.

Evidently people were so impressed by Washington’s reported promise to march a thousand men to Boston that no one actually asked him about it.