Ships of Task Force 38 of the victorious U.S. Third Fleet maneuvering off the coast of Japan on August 17, 1945, two days after Japan agreed to surrender. The force at the time was under the command of Mississippi-born ADM. John S. “Slew” McCain Sr., who himself was only three weeks away from heading to that great wardroom in the sky. 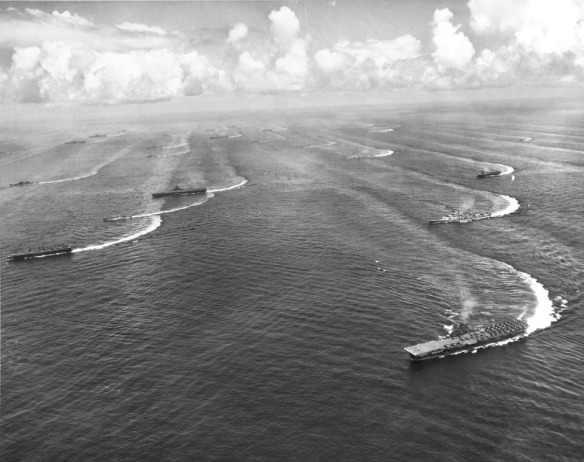 USS Wasp (CV-18) is the aircraft carrier in the lower right. Note that her forward hull number on the flight deck is painted to be readable for planes coming from the bow.

The other identifiable carrier is USS Shangri-La (CV-38) in the left-center. She is the only known carrier to have her air group identification letter (“Z”) painted in white on her flight deck, instead of her hull number.

There are four other Essex-class carriers, four