German offensives on the Western Front blocked. The cold grip of influenza. More and more Americans. Austria-Hungary’s disastrous attack across the Piave. More turmoil in Russia.

8/6/1918 The Komuch: an anti-Bolshevik government in Siberia, supported by the Czechoslovaks 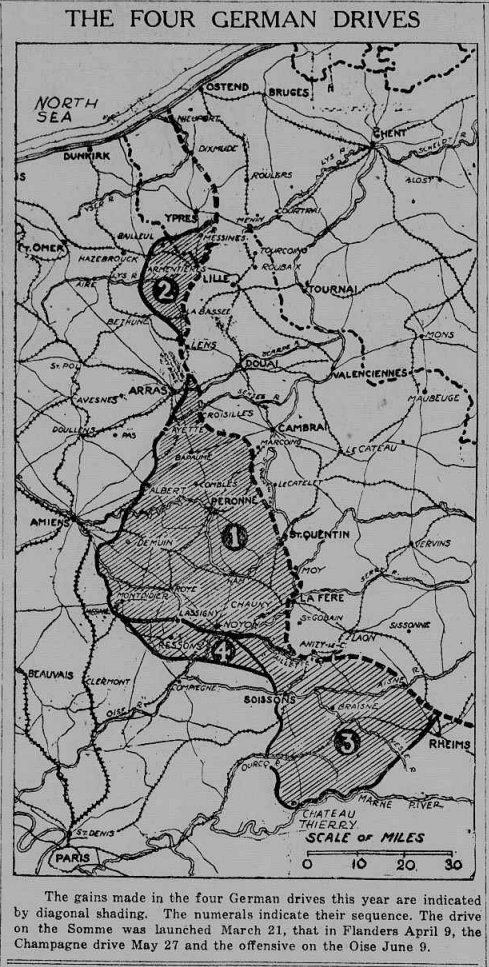 15/6/1918 Austria-Hungary attacks across the Piave

Willing’s next target was the town of Manchack upon which he descended “so rapidly that they reached the Settlements without being discovered.”[1]  On the 23rd, Willing’s advance parties captured the 250-ton British sloop Rebecca, with sixteen 4-pounders and six swivels.[2]  It was a coup worthy of Navy SEALS.  Rebecca was normally a merchant vessel, but had been armed and sent upriver to contest the Rattletrap’s advance by protecting Manchack.  Instead, her presence had strengthened Willing’s force.  Captured while lying against the levy opposite the town, she only had fifteen men aboard when an equal or superior force of Americans struck about 7 am.[3]  With Manchack captured and the Rebecca renamed the Morris, Willing turned his attention to the end game at New Orleans, where he hoped to dispose of his booty and obtain supplies…

Alongside the B-17 Flying Fortress, the B-24 Liberator was one of the main American bomber types of WWII pending arrival of the B-29 to the Pacific theatre. Despite the huge number built, they disappeared with amazing quickness from the postwar American military, serving on only in China and India.

(The EZB-24 test plane which was the very last Liberator in the US Air Force.)

Franz Ferdinand, archduke of Austria-Este, Austrian archduke whose assassination was the immediate cause of World War I. He and his wife, Sophie, were murdered by the Serb nationalist Gavrilo Princip in Sarajevo on June 28, 1914, and a month later Austria declared war on Serbia.

Franz Ferdinand was the eldest son of the archduke Charles Louis, who was the brother of the emperor Franz Joseph. The death of the heir apparent, Archduke Rudolf, in 1889 made Franz Ferdinand next in succession to the Austro-Hungarian throne after his father, who died in 1896. But because of Franz Ferdinand’s ill health in the 1890s, his younger brother Otto was regarded as more likely to succeed, a possibility that deeply embittered Franz Ferdinand. His desire to marry Sophie, countess of Chotek, a lady-in-waiting, brought him into sharp conflict with the emperor and the court. Only after renouncing his future children’s rights to the throne was the morganatic marriage allowed in 1900.

In foreign affairs he tried to restore Austro-Russian understanding without endangering the alliance with Germany. At home he thought of political reforms that would have strengthened the position of the crown and weakened that of the Magyars against the other nationalities in Hungary. His plans were based on the realization that any nationalistic policy pursued by one section of the population would endanger the multinational Habsburg empire. His relationship with Franz Joseph was exacerbated by his continuous pressure on the emperor, who in his later years left affairs to take care of themselves but sharply resented any interference with his prerogative. From 1906 onward Franz Ferdinand’s influence in military matters grew, and in 1913 he became inspector general of the army.

On June 28, 1914, Franz Ferdinand was in the Austro-Hungarian province of Bosnia and Herzegovina accompanied by his wife, Sophie. He was there as inspector general of the imperial army. The visit was not a popular one. Balkan politics were turbulent, and the neighbouring Kingdom of Serbia coveted Bosnia. Moreover, the date chosen for this imperial visit and Hapsburg show of force was June 28, a black date in Serbian history: it was the anniversary of the Turkish victory over Serbia at the Battle of Kosovo in 1389. This fanned the flames of dissent among Serbian nationalists even further.

The royal couple was travelling in a motorcade through Sarajevo in an open-topped car, ignorant of the fact that several would-be assassins awaited along the route of their preannounced stops. Shortly after 10 AM, amid cheering crowds lining the wide avenue called Appel Quay, one of the attackers, Nedjelko Cabrinovic, threw a grenade at the royal couple’s car. The bomb bounced off the back of the vehicle and exploded behind them, injuring members of the entourage who were in the next car and peppering bystanders with shrapnel.

After completing the planned reception at City Hall, the shaken royal couple insisted on changing their schedule and visiting the hospital to check on one of the officers injured in the morning attack. Confusion among the drivers in the motorcade followed, with the drivers starting off in the wrong direction, down the very avenue where the conspirators were still present. When the royal motorcade entered a side street and stopped to turn around, a compatriot of Cabrinovic, 19-year-old Gavrilo Princip, seized his opportunity. Approaching the royal couple’s open car, he shot both Franz Ferdinand and Sophie with a Browning pistol. The driver of the couple’s car then sped off for medical help. Sophie died en route and Franz Ferdinand died shortly after. Princip tried to shoot himself but was apprehended by bystanders. All of the conspirators were eventually found and arrested. Exempted from the death penalty because of his young age, Princip was sentenced to 20 years in prison, where he died from tuberculosis in 1918.

Anti-Serb protests and riots followed throughout Austria-Hungary in the wake of the assassination. One month later, on July 28, Austria-Hungary declared war on the country seemingly behind the murders, Serbia. This set the Triple Alliance (Austria-Hungary, Germany, and Italy) against Serbia’s allies in the Triple Entente (Russia, France, and Britain). Momentum became unstoppable, sparking one of the deadliest conflicts in history—World War I.