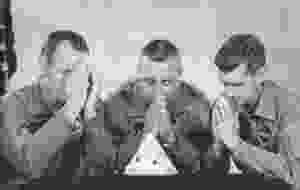 On this day in 1967, the first manned Apollo mission ends in heartbreak. Apollo 1’s crew had been at Kennedy Space Center, preparing for their upcoming launch. Unfortunately, they never made it into space. Instead, all three astronauts were tragically killed during what should have been a simple launch rehearsal.

Source: This Day in History: Apollo 1 ends in tragedy